The OBOR, also known as China’s One Belt One Road Initiative is a strategic and economic agenda that will connect Eurosia, Africa and Oceania along two routes (maritime and on land). Supporters of One Belt One Road say that it will most likely aid economies in need with new infrastructure and economic aid, whilst some say that it will allow China to dominate the areas of which OBOR will pass through. This strategic and economic concept was derived by an amalgamation of the         Silk Road Economic Belt and the Maritime Silk Road of the 21st century.

Whist OBOR is being pitched in Australia as an economic opportunity, it also means that Australia-China ties will be increasing and strengthening, a closer look should be place on how OBOR will affect economic zones in the likes of Malaysia, Indonesia, Bangladesh, Myanmar, Pakistan, Kenya, Tanzania, Oman, Djibouti and of course Sri Lanka. The OBOR initiative is to bring together 35 countries with the setup of 75 economic zones with trade cooperation measures. Whilst many countries are being cautious, Sri Lanka has welcomed the One Belt One Road initiative with open arms.

China’s One Belt One Road initiative comes as part of China’s integration into Sri Lanka with its current Free Trade Agreement along with policy coordination, connectivity and improved trade proceedings. With Sri Lanka’s geographical placement on the global maritime route and the OBOR, as well as other OBOR related project that are being developed such as the Colombo International Port City, the Hambantota Port and other real estate project adjoining Colombo Int. Port City, the OBOR Initiative has much value to the country.

Through China’s One Belt One Road Initiative, Sri Lanka can benefit in various ways, such as with higher trade flows, growth in foreign investments, hard and soft infrastructure developments, integration of Sri Lanka into global value chains, tourism growth, technology & knowledge transfers, and employment opportunities. More importantly, as an impact to Sri Lankan logistics becoming an economic hub in the Indian Ocean.

There are concerns and risks, as India too is vying for the spot of economic hub in the South Asia region, however, there needs to be balance and other means of strengthening relations with past strategic parents such as India and China both. Much like Kazakhstan, Sri Lanka too can garner positive impacts  to become a trading hub, as well as reaching other markets that were before not as easy. By linking Pakistan, India, China, Central Asia, and Europe, Sri Lanka is able to supply products and maintain connectivity with the global market. 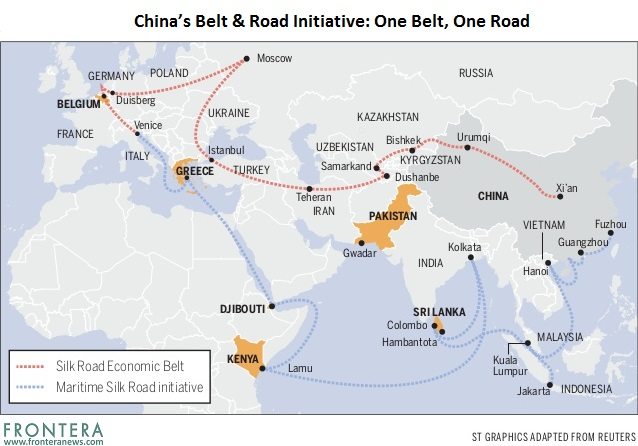 A concern that will occur in the maritime route, would be maritime security and energy, as well sa understanding the OBOR initiative, as many of the policies are in Chinese. Furthermore, Sri Lanka debt burden with its poor Public Debt Management may be of concern too whereby China could benefit from the fiscal situation Sri Lanka has found itself in.