In the recent years, many South Asia’s logistics industries have made great changes t keep up with the changing times and trends. With it, there have been many improvements to accommodate growing demand. However, South Asia still maintains higher costs and shipping still takes longer in the region than any other in the world.  Sri Lanka was named 13th best connectivity in the world with constant improvements being made to Sri Lankan Ports. However, with India’s ports development projects, how will this affect Sri Lanka ports in the future?

Based on the Dewry Global Port Connectivity index, they placed Sri Lanka 13th in 2018,. The index looks at the important of connectivity on the same level as how important a port’s sizing and scale is. The variables that are factored include the number of mainline services that call at each port on a weekly basis as well as the region in which the port is linked to.  All terminals have come together to further promote the Port of Colombo, with a memorandum being signed with Jaya Container Terminal (JTC) that is owned by the state, and the two privatized terminals – Public Private Partnership (PPP) and South Asia Gateway Terminal (SAGT). However with India continuously making developments to their infrastructure, it may affect Sri Lankan Ports and their standing.

The new strategy for India’s port development, named Sagarmala, has definitely put Sri Lanka in competition with improvements planned for its long coastline towards operational efficiency to counter performances and infrastructural difficulties in the past. However, whilst this could be a threat to the Sri Lanka ports, opportunities may also open up, especially for the Port of Colombo. Between the years of 2014-17, throughput of containers arriving at Colombo increase by 8.9% along with the 2013 commencement of Colombo International Container Terminal showing promise for deep and larger vessel accommodation. 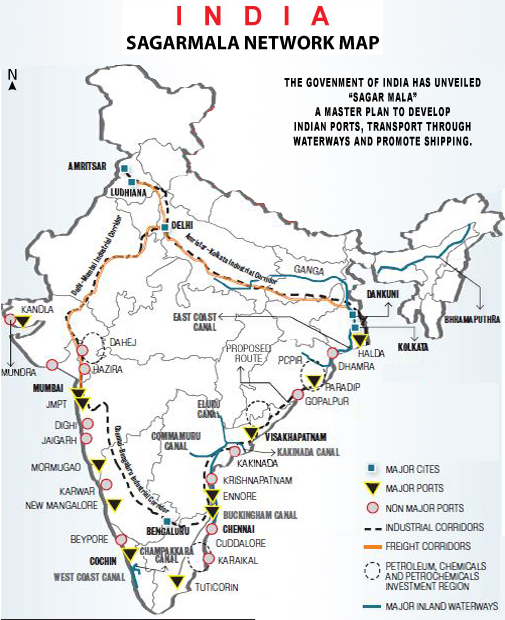 The Sagarmala initiative by India for their ports development has four factors that will be looked into; Port Modernization, Port Connectivity, Port-Linked industrialization, and Coastal Community Development. How this type of port development will affect Sri Lankan Ports is mainly through its infrastructural improvements such as increasing capacity and draft depth of the ports.

However, Sri Lanka does have an advantage on India by way of the port having greater efficiency over its neighbor. If Sri Lanka also applies a certain holistic approach to its performance, there is a chance that Sri Lanka would still be able to retain its market share in the south Asian maritime sector.

What are your thoughts on India’s port developments and the Effect on Sri Lankan ports?